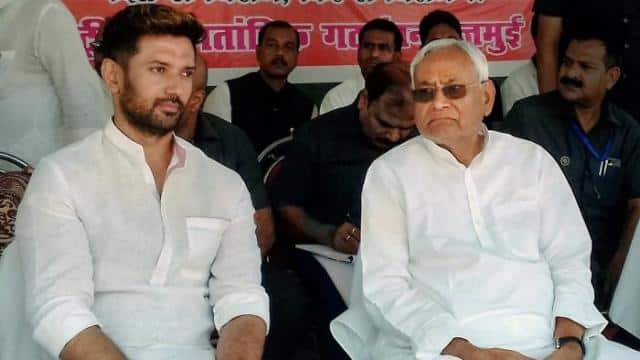 The three-phase mahagram of the Bihar Assembly Elections 2020 is over. Now the exit poll surveys are coming, in which one is sending the grand alliance to power and some is going to the NDA. Now the decision of who will come to power will be decided only after the results on 10th. Most of the people on this survey were eyeing the performance of LJP, a partner of NDA, and according to the survey, LJP proved to be a laggard and at the same time, it also spoiled the multiplication of NDA. In particular, the LJP has given a strong blow to JDU.

LJP likely to get 1 to 10 seats in various surveys
Actually, according to the exit poll, the party LJP, which has split from the NDA, is expected to get 1 to 10 seats in various surveys. According to the exit poll claim, the LJP’s separate fighting stance has damaged the NDA in Bihar. In Bihar Exit Poll 2020 survey, Times Now-CVoter has shown 01 seat while NewsX-DVResearch has shown 04-10 seats to LJP. News 18-Today’s Chanakya has not shown a single seat to LJP while India Today-Axis My India has estimated LJP to get 03-05 seats in its survey.

read this also: Exit poll figures were reversed in 2015, will this time be true?

NDA away from power in Bihar
According to the survey, NDA seems to be far from the power of Bihar. The LJP, which had contested from the NDA after not getting the seat it wanted in Bihar, had announced to contest from the NDA. Chirag announced to contest 135 seats in the Bihar elections, as well as contesting against the JDU candidate. However, the LJP also fought friendly battles with the BJP in Bhagalpur, Rosda Raghopur, Narkatiaganj Govidangaj and Lalganj seats. The LJP gave tickets to most BJP rebel candidates, claiming to form the government with the BJP. This created a mood of excitement among the voters. While LJP’s attack on Nitish Sarkar caused damage to NDA, Tejashwi got the benefit of it. According to experts, from the beginning, the Dalit caste of LJP is considered as a hold on Paswan. This is also its base vote. Apart from this, LJP also has some hold over Mahadalit voters. But after splitting from the NDA, there was a split in this vote bank, which the NDA had to suffer.

read this also: DU survey: NDA government to be formed in Bihar, JDU-BJP alliance may get absolute majority

‘Bihar First, Bihari First’
Here LJP conducted the political bets of ‘Bihar First, Bihari First’ by conducting a survey and attacked the Nitish government. LJP President Chirag Paswan began to surround the Nitish government on various issues. Nitish government policy on Corona, he started letter politics on floods and liquor. The BJP did not openly say anything about Chirag’s move. As soon as the Bihar elections were announced, there was a ruckus between LJP President Chirag Paswan and JDU leaders. While JDU demanded to hold elections on time, Chirag Paswan wrote a letter to the Election Commission and suggested not to conduct elections in Corona. Chirag’s move also helped his father Ram Vilas Paswan, the founder of LJP and a minister at the center. He held a press conference and asked Chirag to support him in every decision.

Borrowing started from 2015
The NDA constituents of JDU and LJP did not like each other in Bihar politics. Actually the Dalit, Mahadalit, Backward and Extremely Backward Classes of both parties are considered as vote banks. In the 2015 election, where JDU contested with RJD led by Nitish Kumar, LJP with BJP. After this, JDU left the RJD and joined the NDA and formed a government in Bihar after joining hands with the BJP. According to political experts, this internal souring increased due to LJP not being represented in the formation of government in Bihar. After this, the LJP became a gradual attacker on the Bihar government.