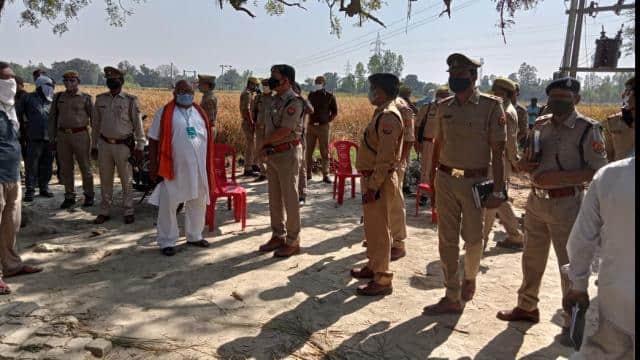 The Dalit President was burnt to death in Amethi, Uttar Pradesh. The family has accused the opponents of murder. A case of murder has been registered against five people on the families of families. Police are pushing for the arrest of the accused.

On the other hand, as soon as the matter was known, Union Minister and MP Smriti Irani immediately came into action. Smriti called the DM and directed the family for financial help. Along with this, SP Dinesh Singh also spoke on the phone. Smriti arrest all the accused as soon as possible and take strong action.

40-year-old Arjun son Ramcharan Kori, resident of Bandoiia village of Munshiganj Kotwali area, was found in a burnt state inside the boundary of the house of a person of the village at around 10:30 pm on Thursday. The family took him to CHC Naugirwa for treatment. From where the doctors referred him to the Sultanpur District Hospital. From Sultanpur, he was referred to the Trauma Center Lucknow. He died on the way to Lucknow. On arriving at the dead house, there was a commotion among the relatives of the deceased. On the information, a large number of police forces reached the deceased’s house.

In connection with advance deliberative action by collecting incident and evidence of death while going to Lucknow for meeting and treating in a half / injured condition in the compound of Krishna Kumar of President Arjun in village Bandoiiya of Munshiganj police station area. #SP_Amethi Bite given by Mr. Dinesh Singh @Uppolice pic.twitter.com/SuqXoTleL3

In this regard, SP Dinesh Singh said that a Tahrir has been found. A case of murder has been registered against five people. Police is investigating the case. Police are pushing for the arrest of the accused.