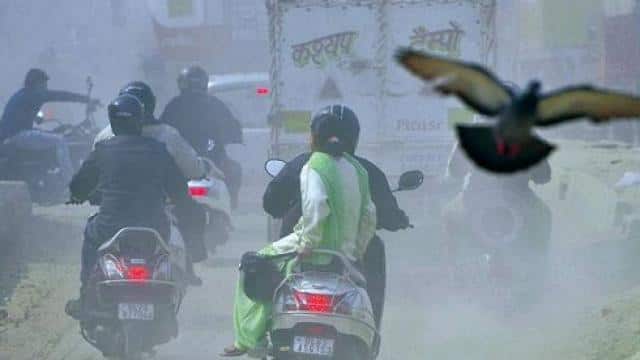 Heavy pollution and thick haze in Delhi-NCR have spoiled the climate here. Along with this, the deteriorating air quality on Friday also brought AQI into the ‘severe’ category.

According to the Pollution Monitoring System of Air Quality and Weather Forecasting and Research (SAFAR), Delhi recorded an average air quality of 486 on Friday morning.

Delhi: Air Quality Index at 448 in the ‘severe’ category at ITO, as per Central Pollution Control Board pic.twitter.com/EuHKljE4tO

A local resident of Gurugram said that people have started bursting firecrackers before the festival of Diwali, due to which we are having trouble breathing.

Another local man in Gurugram said that pollution is increasing day by day, yesterday the situation was really serious and people are burning garbage and bursting firecrackers.

In Ghaziabad too, the air quality has remained in the ‘severe’ category like yesterday. Although today there is a slight improvement compared to yesterday. AQI 424 of the city has been recorded at 9 am on Friday.

At the same time, the pollution situation in Noida-Greater Noida was in the ‘severe’ category. At 8 am on Friday, the air quality index 408 was recorded in Noida and 417 in Greater Noida, and the average levels of PM 2.5 and PM 10 remained above the 400 microgram / m cube.

With the air quality in Delhi in a ‘critical’ state, the CPCB workforce on Thursday suggested government and private offices and other establishments to reduce the use of vehicles by at least 30 percent.

Central Pollution Control Board (CPCB) member secretary Prashant Gargwa said in a review meeting that air quality was likely to remain in the ‘very poor’ category on Wednesday, but air quality fell to ‘severe’ category due to reduced wind speed Has gone.

Head of the Meteorological Department’s Environmental Research Center, V.K. Sony said that the sudden change in wind speed is not recorded in the forecasting model. The workforce suggested that government and private offices and other establishments are advised to reduce vehicle use by at least 30 percent.

(With input from news agency ANI and PTI)

Bihar Result: Chirag Paswan was given ticket to 22 BJP rebels, yet LJP could not do well