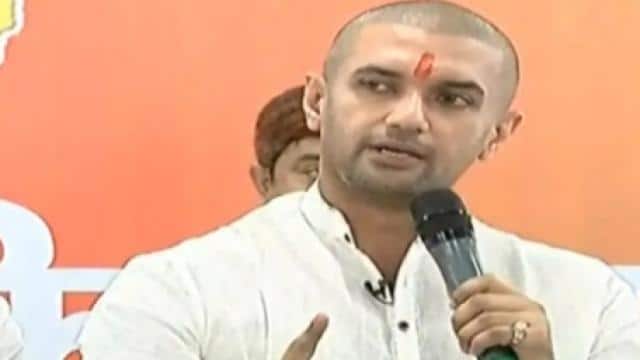 Lok Janshakti Party (LJP) president Chirag Paswan on Sunday made a big claim that after the results of this election, Bihar Chief Minister Nitish Kumar will break away from BJP and join the grand alliance led by the main opposition party of the state, RJD and We will make another attempt to challenge the NDA in the 2024 Lok Sabha elections.

Chirag Paswan, who decided to contest the Bihar Assembly elections 2020 alone, is not acceptable as Chief Minister after this election and he has been claiming to support BJP to strengthen the hand of Prime Minister Narendra Modi after the current assembly elections. .

Nitish Kumar can turn his back again

On Sunday, he claimed, ‘Nitish Kumar (JDU national president), who is known as’ Palturam’ due to repeated beating, can rebound after this election. He came to power in Bihar after a long political battle with RJD chief Lalu Prasad. A few years later, he parted ways with the old ally BJP and formed an alliance with his arch rival. ‘

Chirag, while speaking to a news channel, recalled recalling Nitish’s opposition to Narendra Modi as the prime ministerial candidate ahead of the 2014 Lok Sabha elections, stating, “Whoever challenged himself as a potential prime minister at national level In order to present, how much poison Nitish had spewed against Modi in the assembly elections held five years ago. In two years, Lalu left Prasad and returned to the NDA.

Nitish is aware of Lalu in campaigning

Ram Vilas Paswan, the late father of Chirag Paswas and founder of LJP, joined the NDA before the 2014 Lok Sabha elections. Chirag Paswan, MP from Jamui said, ‘Remember my point that Nitish is very conscious of Lalu Prasad during his election campaign and can once again try to form the next government with the Grand Alliance. One can even try to present himself as an alternative to Modi in 2024. ‘

Earlier, the LJP chief reiterated his allegations of corruption in Nitish’s seven convictions during a press conference, including drinking water and paved street and drain schemes in every house. He said, “There should be a thorough investigation of corruption in these schemes and we should not be surprised if the Chief Minister’s involvement comes to the fore.” In more than 140 of the 243 seats in the Bihar Legislative Assembly, the LJP has pitted its candidates against most JDU candidates.