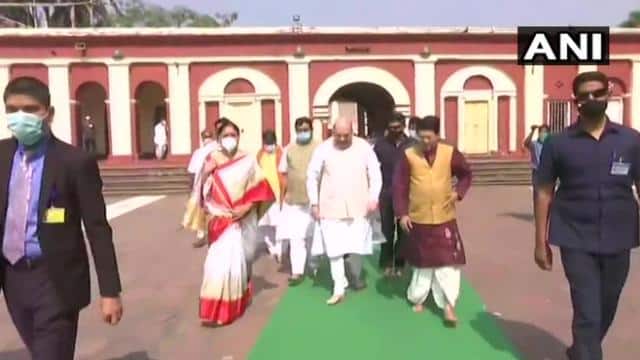 Political activities have increased in the state ahead of next year’s assembly elections in West Bengal. Union Home Minister and veteran BJP leader Amit Shah is on a tour of Bengal to give a boost to BJP’s campaign in West Bengal. Today is the second day of Union Home Minister Amit Shah’s visit to West Bengal. It is being told that Amit Shah will hold an organizational meeting with the Bengal unit of the Bharatiya Janata Party today. For the first day of his Bengal tour, Amit Shah performed pooja at Dakshineswar temple this morning. Let me tell you that Amit Shah had said on the first day of his Bengal tour that the fall of Mamta Banerjee’s government has started.

– I have come to Dakshineswar many times and have returned from here after receiving energy. Today the politics of appeasement is going on on this land, it has hurt the great tradition of Bengal. It is my request to my mother Kali that under Modi’s leadership this country once again attains a proud place in the world: Home Minister

Amit Shah visited the Dakshineswar Kali Temple in Kolkata and worshiped it.

He is on a two-day visit to the state. pic.twitter.com/VrcOOkr5Jg

Amit Shah has set a target of winning 200 seats and coming to power in the state out of a total of 294 seats in the state. He said on Thursday that he was feeling a lot of anger against the Mamata Banerjee government of West Bengal and the fall of this government has begun. Amit Shah called upon the people to give the BJP a chance to form the next government to embody the dream of ‘Sonar Bangla’.

Amit Shah arrived in Kolkata on Wednesday night to take stock of the preparations of the party organization in view of the assembly elections to be held in the state in 2021. He underlined that West Bengal is a border state and the security of the country is attached to it. Shah was accompanied by BJP state president Dilip Ghosh, party’s national general secretary Kailash Vijayvargiya, national vice-president Mukul Roy along with Shah on a day-long visit to Bankura.

It is noteworthy that Bankura is a district with a population of tribal and backward communities and it is one of the districts where BJP made a deep inroads in the 2019 Lok Sabha elections. According to sources, Shah, who visited Bankura to take stock of the party’s organization, called on BJP workers to pledge to work hard to achieve this goal.

Keeping the media away, during a closed-door meeting, he said that the state unit will have to fight fiercely against the Trinamool Congress to come to power in Bengal. The BJP currently has eight MLAs in the Assembly. It also has the support of eight MLAs of the (ruling) Trinamool Congress, who fell in its court after the 2019 general elections.

Party sources said Shah asked BJP workers to discuss the people-oriented policies of the Center and the anti-people policies of the Mamta Banerjee government of the state. Another BJP leader said, ‘They asked us to tell the people of West Bengal how they are being deprived of their central schemes because the Trinamool Congress government did not allow them to be implemented in West Bengal. We have been asked to tell people about the misrule of Trinamool Congress in the state.

Ind vs Aus 2020-21: With whom will Warner start the innings with Pukowski or Burns in the Test series? David himself answered this