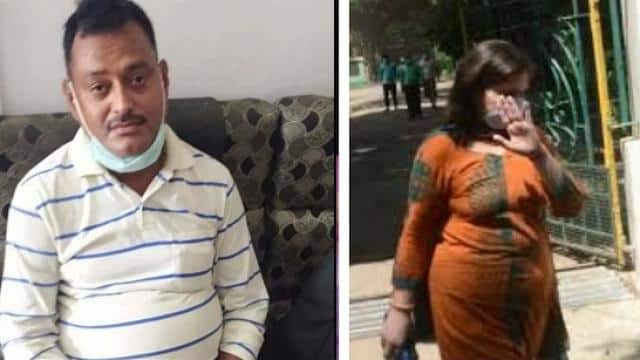 Producer and director Mohan Nagar, who is making a biopic on the Kanpur encounter (Bikeru scandal), has sent a legal notice to the wife of noted criminal Vikas Dubey. In the notice, Richa Dubey has described the biopic as a violation of Article 21 of the Constitution of India. According to the information received, this biopic was being made under the name ‘Hanak’.

High Court Bar Association general secretary Prabha Shankar Mishra and co-advocate Rishabh Raj have sent a notice to Mohan Nagar demanding that it be stopped immediately. He has alleged that the film is being produced without permission from the victim’s family and a rumor has been spread that Vikas Dubey’s wife Richa has sold the rights to broadcast and book the film for Rs 50 lakh.

WHAT SAYS Article-21
Article 21 of the Constitution of India states that “no person can be deprived of his right to life and personal liberty except by the procedure established by law”. … It is noteworthy that the right to education at the primary level has been made a fundamental right under Article 21A by the 86th Constitution Amendment of 2002.

Shooting was taking place in Madhya Pradesh
The news of the Kanpur encounter case and development of a biopic on Vikas Dubey came in December last year. It was then revealed that the shooting of ‘Hanak’ was going on in Mandideep near Bhopal, the capital of Madhya Pradesh. This biopic is being produced under the banner of Mumbai’s ‘The Production Headquarters’. Vikas Dubey was arrested on 9 July 2020 from Ujjain under a dramatic development. On the same day, on 10 July 2020, the UP police killed him in an encounter. The Vikas Dubey case was very popular. Social media dominated the months. The exercise of bringing the story of this episode to the public through web series is now seen as eclipse.

Notice to the author of the book I’m from Kanpur

It is being told that this biopic book is based on ‘Main Kanpur Wala’. This book has been written by Mudul Kapil. Advocate Prabhashankar Mishra said that the Production Headquarters Limited (UK) government in association with Production India LLP is producing a film and web series called Hanak. Its author is Mridul Kapil. The film is based on his book Main Kanpur Wala. The book is based on the story of Vikas Dubey, who was killed in a police encounter on 10 July 2020. An inquiry commission was set up under the chairmanship of retired Supreme Court Justice BS Chauhan to investigate this encounter.

Advocate Prabhashankar Mishra said that Mridul Kapil, the author of the book Kanpur Wala, and the biographer who created the web series, will defame the reputation of his client by presenting false and fabricated facts to this biopic. He has sent legal notices to a dozen people, including the producer of the film Hanak, Mohan Nadar, director Manish Vatsalya, writer Mridul Kapil. Also, a copy of the notice has been sent to the Ministry of Home Affairs and Information and Broadcasting. Said that if its publication and broadcast are not banned, then he will take recourse to the court.

Know what happened in the Vikas Dubey case
2 July

– At 12 o’clock, 35 policemen from Shivrajpur, Bilhaur, Choubepur, Shivli police station had gone to bury the house of notorious criminal Vikas Dubey, resident of Bikeru village of Choubepur police station area.
Rahul Tiwari, a resident of the development village, filed a lawsuit against development and other sections.
– Vikas Dubey comes to know that 35 policemen are coming to punish, just five and a half hours before the Thursday police action.
-Vikas called his comrades with weapons and made JCB stand outside the house, so that the policemen would not run away.
Before the police action, the evaders of active development in the police department gave the fake information of the line breaking by calling the substation and made the lights of Bikeru village light.
– Around 1.30, under the siege of development, his gargos fired about a hundred rounds. Retaliation also took place, but Vikas escapes after being surrounded by 8 policemen including the CO.
After about two hours, police of about a dozen police stations and more than 100 policemen in the force of CO Circle surrounded five villages including Bikaru. The search operation went on all night.

July 3:
On the direction of the DGP in the morning, the police laid siege and strongman in the presence of fast-moving personnel of STF. Vikas Dubey’s two companions are killed in an encounter that took place 10 km from Bikeru.
– ADG La & Adar, DGP reached Aspa Bikaru village around 12 noon.
– More than sixty police teams, more than 1500 jawans, many teams of crime branch are looking for criminals.
– Chief Minister Yogi Adityanath himself reached Kanpur and announced to give one crore rupees to the family of the martyr.
– Vikas Dubey is suspended in the suspicion of Mukhbiri to Vinay Tiwari, Inspector of Choubepur police station.

fourth of July :
– Police develops bulldozers at Vikas Tiwari’s house. His luxury cars are broken. The search operation went on all night.
IG Mohit Agarwal said in the night that there was information that Vikas had hidden in the walls of his house by hiding weapons and hence action is being taken.

July 5:
In the search house found in Vikas’s house, the police found explosives and many weapons.
– Vikas’s servant and sharp shooter was trying to escape from Kallu city when Dhanda caught up after the murders in Kalyanpur.

July 6:
– Police arrested three people, including Kallu’s wife, Vikas’s brother-in-law who helped in the attack.
The DGP, on the recommendation of IG Mohit Aggarwal, increased the prize money to Rs 2.5 lakh.

July 7:
– Police releases poster of 15 development colleagues.
– Late night the police find Vikas Dubey’s location in a hotel in Faridpur, Haryana.
– Vikas absconds before the police arrives
– In this case Vinay Tiwari is transferred from the post of STF DIG to the then DIG Anant Dev on charges of not taking action.
– All 68 policemen of Chaubepur police station were cleared.

July 8:
– Amar Dubey, who is closest to Vikas in the morning, is killed in an encounter near Hamirpur.
After this, another partner of Vikas Dubey, Shyamu Bajpai was arrested by the Chaubepur police after the encounter. Shyamu Bajpai has a prize of ₹ 25000.
– On Vikas Dubey, the reward is increased from 2.5 lakhs to 5 lakhs.
– Outside Vikas Dubey’s village Bikru, two wells are searched with the help of a diver.

July 9:
– Vikas Dubey is identified by the security guards of the temple while coming out after the darshan at Mahakal temple in Ujjain, Madhya Pradesh.
-Madhya Pradesh Police hands over Vikas Dubey to UP Police / STF.
UP Police takes Vikas Dubey from Ujjain and leaves for Kanpur.

10 July:
-All the time media vehicles chase the convoy of STF. But at a dawn, media vehicles are stopped by barricading.
A little later, the news comes that Vikas Dubey tried to run away after an STF trainer was killed and was killed in an encounter.

Sonu Sood said between voting in Bihar, mind before pressing the button for vote

2 great smartphones of Nokia coming, will be launched on this date

Omar Abdullah said – Land law of other states is stronger than new law of Jammu and Kashmir, if we say it is called traitor