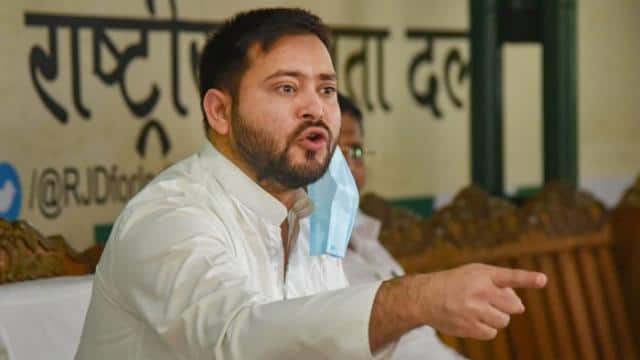 With the end of the third and final phase of the Bihar assembly elections, exit polls from various TV channels and survey agencies have come. Nitish Kumar’s farewell is seen in all major exit polls, while Tejashwi Yadav is seen becoming the new Chief Minister of the state. With the percentage of votes, the number of seats can also be more of the Grand Alliance. In the exit polls, the grand alliance can get the maximum seats up to 180, while the NDA has been given up to 128 seats.

The ABP News-C voter exit poll is also getting 131 seats. This means that the next government in the state may be of the RJD-led grand alliance. The Mahagathbandhan is projected to get 108–131 seats, the NDA 104–120 seats. At the same time, if you talk to other parties, you can get 4-8 seats. Chirag Paswan’s Lok Janshakti Party (LJP) may win 1-3 seats.

Republic TV – Jan Ki Baat Exit poll shows the formation of a grand coalition government. The Grand Alliance may get up to 138 seats, while the NDA may have to settle for just 117 seats. According to exit poll, the NDA is projected to get 91–117 seats with 37–39 percent of the vote. The Grand Alliance may get 40–43 per cent votes, while the seats may go up to 118–138. Chirag Paswan’s LJP may win 5-8 and other parties 3-6 seats.

Also read: Tejashwi left Nitish behind, made first choice for the post of Chief Minister

In the exit poll of Today’s Chanakya, who has given sitak exit poll in many elections, this time the tsunami of the grand alliance is going on. In the News 18 and Today’s Chanakya exit polls, the Grand Alliance may get 180 seats, while the NDA may get a shock. The NDA is getting just 55 seats in the poll. At the same time, 8 seats can go to the account of others. Like the rest of the exit poll, the Grand Alliance government appears to be formed in the Times Now-seat voter exit poll. In the exit poll, the grand alliance can get 108–131 seats, while the NDA can win 104–128 seats. However, in terms of vote percentage, NDA is getting more vote percentage than the grand alliance. The NDA may get 37.7 percent of the vote, while the Grand Alliance may get 36.3 percent of the vote. The LJP may get 1-3 seats and the vote percentage may be 8 percent. At the same time, other parties can manage to win 4-8 seats.

What is estimated in TV9 Bharatvarsh exit poll?

When will I know how accurate the exit poll is?

How accurate are the exit polls by various channels conducted for the Bihar assembly elections, will be known with the release of the results. The results of the Bihar assembly elections will be announced on 10 November. In such a situation, a few hours after the start of counting, it will be clear whether the NDA government is going to be formed again in Bihar or the Grand Alliance government will return. At the same time, the Election Commission has conducted the Bihar election in three phases. Voting for the first phase is held on 28 October, voting for the second phase is held on 3 November and for the third phase, voting is on 7 November.

IPL 2020 MI vs RCB: Ravi Shastri salutes Suryakumar Yadav, who was not selected in Team India, wrote this special message