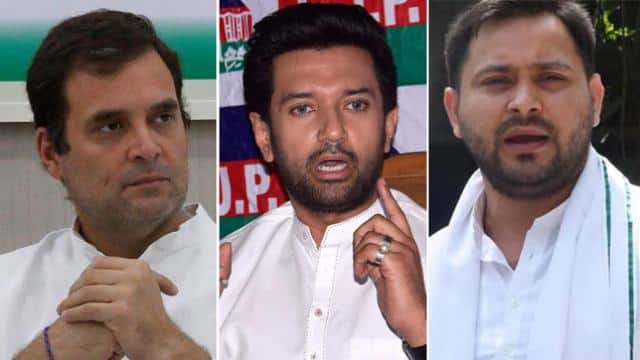 The campaigning for the first phase of Bihar assembly elections will end soon. All the parties are throwing full force in the campaign. While the JDU-BJP faces the challenge of retaining power, the RJD-Congress alliance wants to reach the threshold of power this time. But in this entire election campaign, everyone’s eye is on Lok Janshakti Party and RLSP.

Lok Janshakti Party is in the lone election. With the slogan ‘Impossible Nitish’, LJP has also fielded its candidates against JDU. JDU is contesting on 35 of the 71 seats for the first phase. While RJD is contesting on 42 seats. In such a situation, JDU and RJD are expected to compete directly in about two dozen seats.

In the first phase, the Congress is contesting 21 seats, but its direct contest with JDU is only seven seats. LJP has also fielded candidates for many of these seats. In such a situation, the strategy of the Grand Alliance is based on the performance of the LJP candidate. A senior party leader said that if the LJP gets BJP’s vote on these seats, the fight will become easier. But the aggression with which the BJP is contesting elections is unlikely.

Congress’s direct contest with BJP in 11 seats
The Congress has a direct contest with the BJP in 11 seats. A party leader said that we are focusing on JDU fighting seat more than the seat of BJP. Because, splitting the anti-incumbency vote can also cause harm. Giving the example of Punjab assembly elections in the year 2012, he said that in these elections Manpreet Badal’s People’s Party of Punjab was expecting the party to cut pro-BJP-Akali votes, but in contrast Manpreet Badal divided the anti-incumbency vote and Congress lost. Has gone.

Also read- During the campaign, when Tej Pratap Yadav started hitting fours and sixes on the cricket pitch, watch the video

In such a situation, it is difficult to assess whether the LJP makes a dent in the anti-incumbency vote, or cuts the pro-incumbency vote. The performance of RLSP and other smaller parties is also difficult to assess initially. A Congress leader associated with Bihar elections said that we are finalizing the Bihar assembly election strategy after studying all the figures.

Why did Amit Shah eat food at the house of Matua community, why is there a competition to woo Mamata Banerjee’s TMC and BJP

CBI investigation in Hathras case under the supervision of Allahabad HC, trial will not be transferred yet, Supreme Court verdict