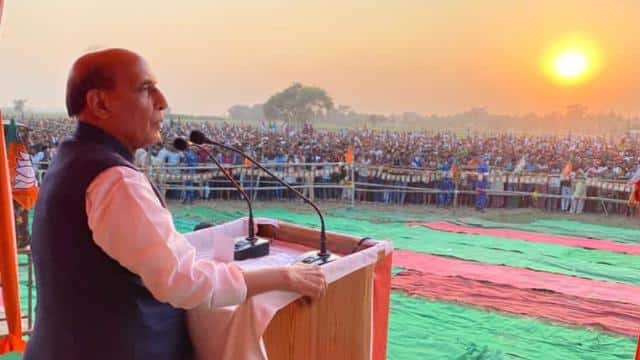 Defense Minister Rajnath Singh has said that the leaders of the country’s opposition parties are working to give strength to Pakistan. They question the work related to the security of the country. When we talked about Pakistan being involved in the Pulwama attack, the Congress was raising questions. Now in Pakistan’s National Assembly, the minister has brought the reality to the forefront by giving a statement, so the talk of Congressmen and other opposition parties is closed. Defense Minister Rajnath Singh was addressing the people in the election meeting in favor of BJP candidate Lalan Paswan in Pirpainti, Bhagalpur on Friday.

He said that when the terrorists killed 40 soldiers in Pulwama, the Congress people were questioning our intentions. Attacking the opposition, he said that former Prime Minister Indira Gandhi had broken Pakistan into two, then Atal Bihari Vajpayee had praised her in Parliament. But today the only task of the Congress is to raise doubts and questions on the achievements of the government. In the name of border security, one should work above the party spirit. Opponents on the India-China dispute say that China has grabbed India’s land. He said that if we disclose the achievements of the army, then all of you will jump with joy. In Galvan, 20 soldiers from Bihar martyred and protected the country. Bihar is the land of the brave.

Fulfilling our promise
Rajnath said that the promises made by the leaders in independent India, if partially fulfilled, would have changed the fate of the country. But we show it by what we say. Counting the achievements of removal of Section 370 from Kashmir, devising way for construction of Shri Ram temple, amendment of citizenship law, giving gas connection in every house etc. . Fast work is being done on it. When Rajiv Gandhi was the Prime Minister, he had said that only 16 paise can reach people in 100 paise, whereas today PM Narendra Modi opened the account of every poor and the entire amount is reaching everyone’s account. If the amount is being given to the farmers ‘account, then the gas subsidy is also reaching the beneficiaries’ account directly.

Praised the work of the Chief Minister
Appreciating the work of Chief Minister Nitish Kumar, the Defense Minister said that his stains have not been stained yet. We no longer undertake a development rally but a Tel Pilavan Lathi rally. We do not open shepherd schools but want to make shepherd’s children IAS, IPS, engineers and doctors. The era of lanterns is over. Now the LED era has arrived. Deepawali has arrived, Lakshmi ji sits on a lotus flower. So shoot arrows, extinguish lanterns and feed lotus flowers.

‘Speak up corona, get absent’, claims Sushil Modi – Lalu calls BJP MLA from jail, listen to what happened in the audience