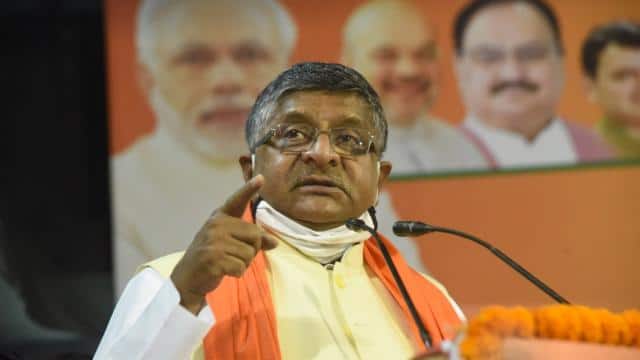 The first phase of voting for the Bihar assembly elections is over. After this, tussle between political parties is increasing. The war of words has intensified. Meanwhile, Union Minister Ravi Shankar Prasad said about Congress leader Rahul Gandhi on Wednesday that he no longer has political stature and no one takes him seriously.

The remarks of the BJP leader and Union Minister came after a statement given by Rahul Gandhi during a rally in Valmiki Nagar in which he said, “Prime Minister Narendra Modi’s effigies were burnt on Dussehra instead of Ravan.”

Ravi Shankar Prasad said, “Rahul Gandhi’s political position is not much left, he is speaking ulul-julul everyday. Nobody takes him seriously. He was the President of Congress Party. Should he speak it? Know this How desperate is the Congress? When the results are out, you will see what the condition of the party is. “

The Union minister claimed that Rahul Gandhi spread lies about Rafael, tried to demolish the morale of the armed forces and his statements were used by Pakistan Prime Minister Imran Khan at the United Nations. He said, “If you watch Pakistan TV, Rahul Gandhi is very visible. This is his standard.”

Targeting the central government led by Prime Minister Narendra Modi over the new agricultural laws, Gandhi had said that effigies of Ravana are usually burnt on Dussehra, but this time effigies of Prime Minister and industrialists were burnt in Punjab. He had said, “It is sad, but it is happening because the farmers are upset, the youth is angry.”

Congress counterattack, said – When the defeat is seen, BJP goes to the shelter of Pakistan

Delhi Weather: People of Delhi-NCR can get relief from pollution, chances of rain with strong wind today

New Google Pay logo came out, now app will be seen in this style