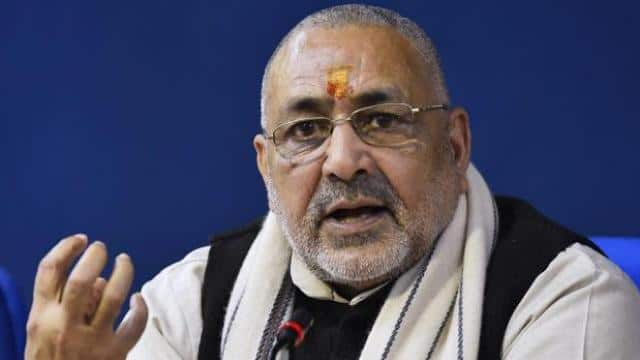 Bird flu knocking in four states amid Corona epidemic has raised concerns. The central government has issued advisories to states to take precautions and implement measures in case of abnormal bird deaths. Meanwhile, the Union Fisheries, Animal Husbandry and Dairy Minister Giriraj Singh has warned people about the flu. He has appealed to those consuming meats and eggs to cook it completely.

In some places there have been reports of migratory and wild birds dying mostly from bird flu. Cook and eat the meat and eggs completely. There is nothing to worry. All possible help is being done by alerting the states.

Union Minister Giriraj Singh tweeted that in some places there have been reports of death of most migratory and wild birds from bird flu. Cook and eat meat and eggs completely. There is nothing to worry. All possible help is being made by alerting the states.

At the same time, according to officials of Animal Husbandry and Dairy Department, outbreak of bird flu has been confirmed in Rajasthan, Madhya Pradesh, Himachal Pradesh, Haryana and Kerala. In Baran, Kota, Jhalawar of Rajasthan and Mandasair, Indore and Malwa in Madhya Pradesh, crows have died. Migratory birds in Kangra in Himachal Pradesh and poultry-ducks in Karel and poultry and ducks in Kottayam and Allapuzha are dead.

Bird flu has been confirmed after testing of infected samples at ICAR-NIHSAD Bhopal, Government of India. Whereas the said State Governments had already confirmed this. Officials said that in view of the bird flu infection situation, a consultation has been issued to Rajasthan and Madhya Pradesh on January 1 to prevent the spread of infection. Both states have started control measures as per the guideline of the National Action Plan for Avian Influenza (Bird Flu). The second consultation has been issued to Himachal Pradesh on 5 January. In this, the state has been advised to take necessary steps to prevent poultry disease from progressing further.

Central teams stationed in Kerala and Haryana
The Union Health and Family Welfare Ministry has deployed the central team in Panchkula in Haryana affected by bird flu and in Alappuzha and Kottayam districts of Kerala. The Ministry said that the Animal Husbandry Department on January 4 confirmed the bird flu infection in Alappuzha and Kottayam districts of Kerala by examining samples of dead ducks. Similarly, samples are being tested in Panchkula district of Haryana. This team will help the State Health Department in implementing the plan of the Union Health Ministry to prevent the spread of bird flu.

Congress is not unanimous on RCEP, no one is supporting, no opposition, know who said what and when

Horoscope January 15: People of Pisces will open their way of earning, domestic happiness will be disrupted for Libra zodiacs

IND vs AUS: Batting coach Vikram Rathod told, Rishabh Pant sent for batting up in Sydney at the behest of Virat Kohli

India-China Standoff: India prepares to avoid any snowfall of Dragon, tunnels made in Ladakh