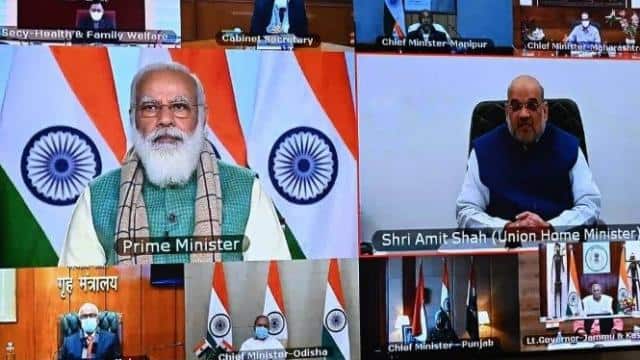 Prime Minister Narendra Modi held talks with Chief Ministers of various states on Monday before the Corona vaccination to be held in the country from January 16. This was the first interaction between PM Modi and CM after the approval of the emergency use of the vaccine by the Drug Controller General of India (DCGI). Union Home Minister Amit Shah also participated in this virtual meeting. After the meeting, PM Modi said that all states acted in solidarity during the Corona crisis. Let the DCGA approve two vaccines – an Oxford AstraZeneca vaccine, known as Kovishield in India. Second India Biotech’s Kovaxin. So far, several rounds of dry runs have been done across the country.

– PM Modi said that we have completed dry-runs in almost every district of India, which is a big achievement. We have to combine new SOPs with our old experiences.

– After the meeting, PM Modi said, “I am satisfied that we all worked unitedly during this crisis of Corona. All of us have tried to follow the teachings given by Lal Bahadur Shastri Ji. ”Modi said that we all have to ensure that no rumors of any kind are spread on the vaccine.

– The Chief Minister of Chhattisgarh was involved in a virtual meeting with PM Modi on vaccination.

The PM is discussing # COVID19 situation and vaccination rollout with CMs of all states, in the meeting.

According to the official statement, after the review, it was decided that the upcoming festivals Lohri, Makar Sankranti, Kovid-19 vaccination campaign will start from 16 January 2021 in view of Pongal and Magh Bihu etc. According to this, after the health workers and the personnel working on the front front, priority will be given to those above 50 years of age and those under 50 years of age who are already suffering from other diseases, which is about 27 crores. The government said, the national regulator has given emergency use clearance or speedy approval to two vaccines (covishield and covaxine) which have been found capable of providing safety and immunity.

Sisodia said on increasing cases in Delhi, medical management is the only way to fight Corona

Mushfiqur apologized for raising his hands on fellow player, got this punishment

INDvAUS: Captain Virat Kohli broke silence about Rohit Sharma’s fitness, said- We all thought he would be with us in Australia’s flight.