The results of the Delhi MCD elections are out. The Aam Aadmi Party has pulled out the BJP sitting on the MCD chair for 15 years. CM Arvind Kejriwal’s party, which has crossed the magical figure of majority, will now run its power in the Municipal Corporation of Delhi as well. AAP has won 134 out of 250 seats in the MCD elections. BJP has got 104 seats in its account, while Congress has been reduced to 9 seats. At the same time, 3 independent candidates have also won the elections.

When the exit polls came out after the voting was over for the MCD elections, almost everyone predicted AAP’s victory and it happened as well. Even though the seats were slightly less, but the prediction of victory and defeat has proved to be correct. Let’s try to see and understand.

How accurate is TV9’s exit poll?

The exit poll conducted by TV9 Bharatvarsh regarding the Delhi MCD elections showed Aam Aadmi Party getting majority. Whereas this time BJP had expressed the possibility of going away from the power of MCD. And exactly the same happened. AAP got majority and BJP lost power. For the Congress, we had told that even a double figure in the Delhi Municipal Corporation elections is a distant dream for the Congress. And it happened exactly like that.

According to TV9’s exit poll, out of total 250 seats in MCD, 140 to 150 seats were seen going to Aam Aadmi Party’s account. At the same time, BJP was predicted to get 92 to 96 seats. Congress was projected to win 6 to 10 seats, while 2 to 4 independents. The results remained around these figures.

How accurate were the rest of the exit polls?

India Today-Axis My India predicted 149-171 seats for AAP, 69-91 seats for BJP, 3-7 seats for Congress and 5-9 seats for Independents. ETG-TNN predicted 146-156 seats for AAP while 84-94 for BJP. These figures were not very close to the results, but their predictions about victory and defeat were correct.

Waiting for the results of Himachal-Gujarat

Now it has to be seen how accurate the exit polls will prove to be in Himachal Pradesh and Gujarat. The results of the assembly elections held in both the states are going to come on December 8. All exit polls have predicted BJP coming back to power in Gujarat. At the same time, the possibility of a tough fight between the Congress and the BJP has been expressed in Himachal. However, BJP has been given an edge in terms of seats. Tomorrow the picture of both the states will be clear.

What is the forecast in Himachal? 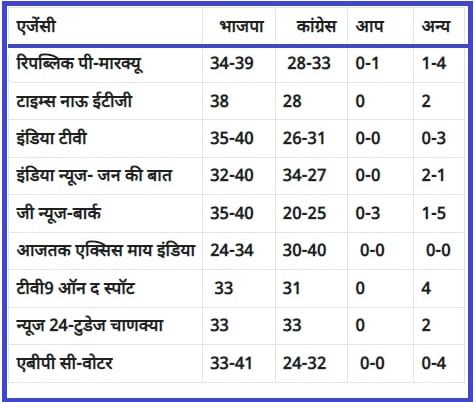 What are the possibilities in Gujarat?

However, on December 8, the picture of both the states will be clear.