You must have heard a lot about the atrocities of the Mughals in India. But, do you know when the Mughal Empire was on the verge of decline, at that time foreigners started trying to enter India. The Afghans also took advantage of this and they reached Delhi and established their own kingdom along with looting a lot of money. It is said to have started with the invasion of Nadirshah, which targeted India around 1736. Not only this, he oppressed the people from the Mughals so much that his story still trembles.

In such a situation, we know who this Nadirshah was and how it got its roots in India. Along with this, know about his cruel antics, which must have been written in bloody ink in the pages of history. So know the story of Nadirshah…

This is about the cruelty of Nadir Shah, who took over the reign in 1736 after the death of Shah Tehmasp of Persia and started the struggle against the Afghans. Similarly, he hoisted the flag on Kandahar on 12 March 1738 and now his target was India. Before coming to India, Nadir Shah first got to know about the internal condition of India at that time very well. Then it played its part with full planning and continued to pretend that he was indeed a friend of the Mughal emperor and that he was only coming here to punish the Afghans.

On the other hand, he had captured Kabul, Ghazni, Jalalabad, Peshawar. Till this time he was not showing any cruelty in India and was living well on the subjects of the Mughals. It is said that once one of his messengers was killed near Jalalabad, due to which he got angry. He again ordered the slaughter and slowly his terror started to set in. The special thing about Nadir Shah was that he was slowly expanding his area without being too hasty. He then entered Punjab and the kings there surrendered to him.

First in Punjab, Nadir Shah appointed him as the Subedar of Punjab on his behalf and then he proceeded towards Delhi. This is about 13 February 1739, when the emperor of Delhi, Muhammad Shah tried to stop him, but had to face defeat. Then both of them made a treaty.

It is said that by March 9, he entered Delhi and was also welcomed by the Mughal emperor Muhammad Shah. He stayed in the Red Fort and his companions started cruelty in Delhi. There was a situation of nuisance among the public and after the order of Nadirshah, there was a public massacre and more than 20 thousand people were killed and shops were looted and a lot of area was burnt. 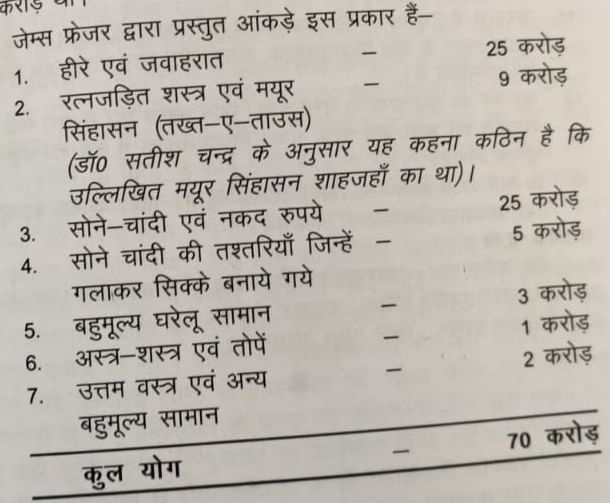 It is said that according to that time around 3 crore rupees were looted in it. During that time the emperor remained like a prisoner in his city. The position of the Mughals became very bad and the influence of Nadir Shah increased greatly. During that time he took Kohinoor, Peacock Throne, valuable jewelery and a lot of money with him. Nadirshah created such terror that even today the soul trembles about him. It is said that people were disturbed by the stench emanating from the pile of dead bodies.

After this he went back after looting from Delhi and while leaving he handed over the throne to Muhammad Shah. While leaving, he went to his country with a lot of money and valuables.