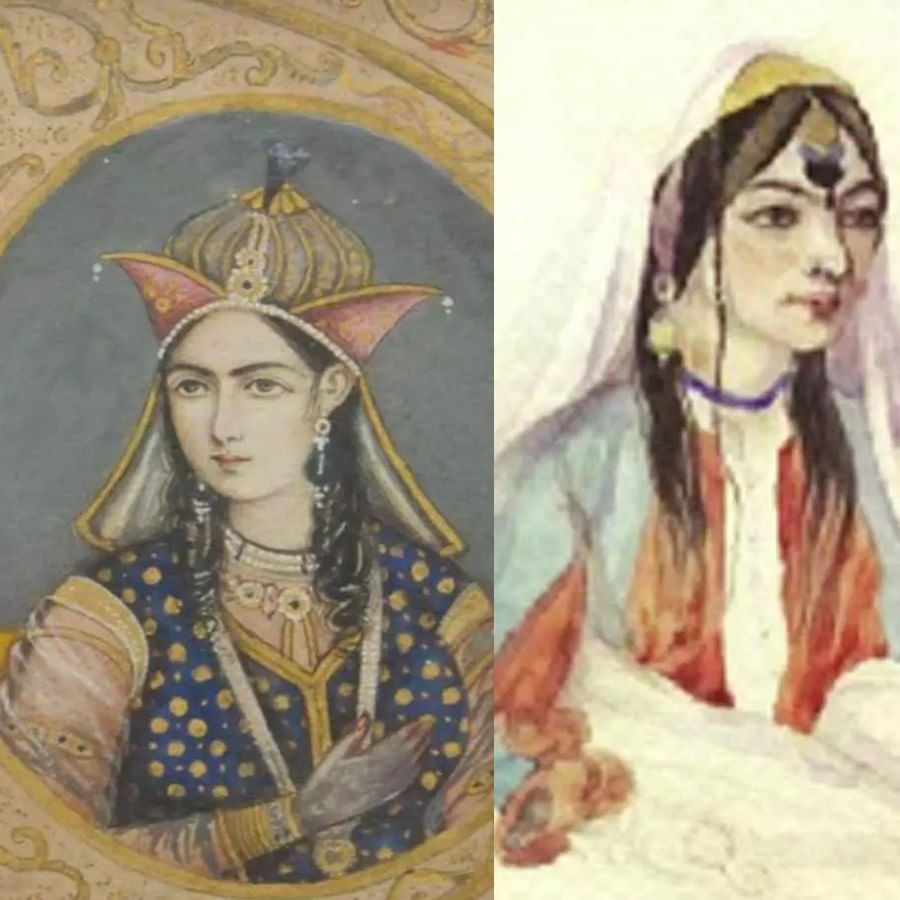 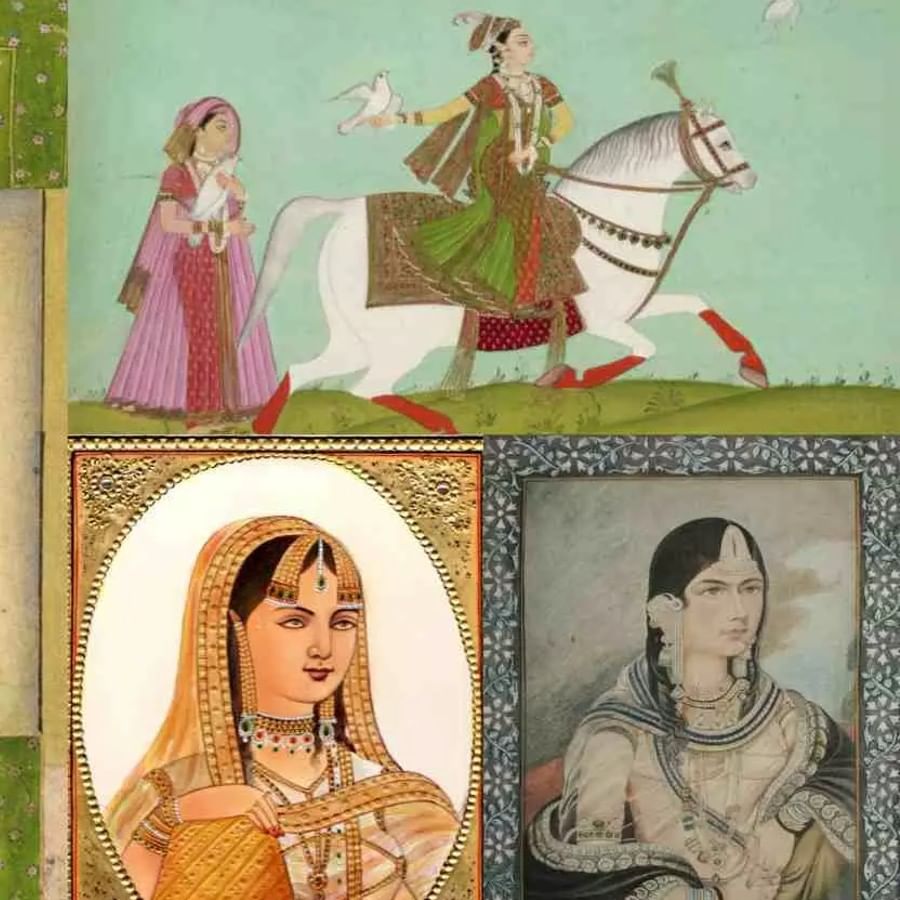 Humayun, the second emperor of the Mughal Empire, also followed in the footsteps of father Babur in this matter and he also had wives. He was married to Bega Begum at an early age. After this, Shad Bibi, Chand Bibi, Mehchak Begum, Maywa Jaan, Shahnam Agha, Gulberg Barlas and Gunwar Bibi were entered in his harem. When Humayun first saw Hamida Bano, she was 13 years old. The age gap between the two was as much as that of father and daughter, but age was forgotten in love. The ones seen in the picture are Mehchak Begum, Bega Begum and Hamida Bano. 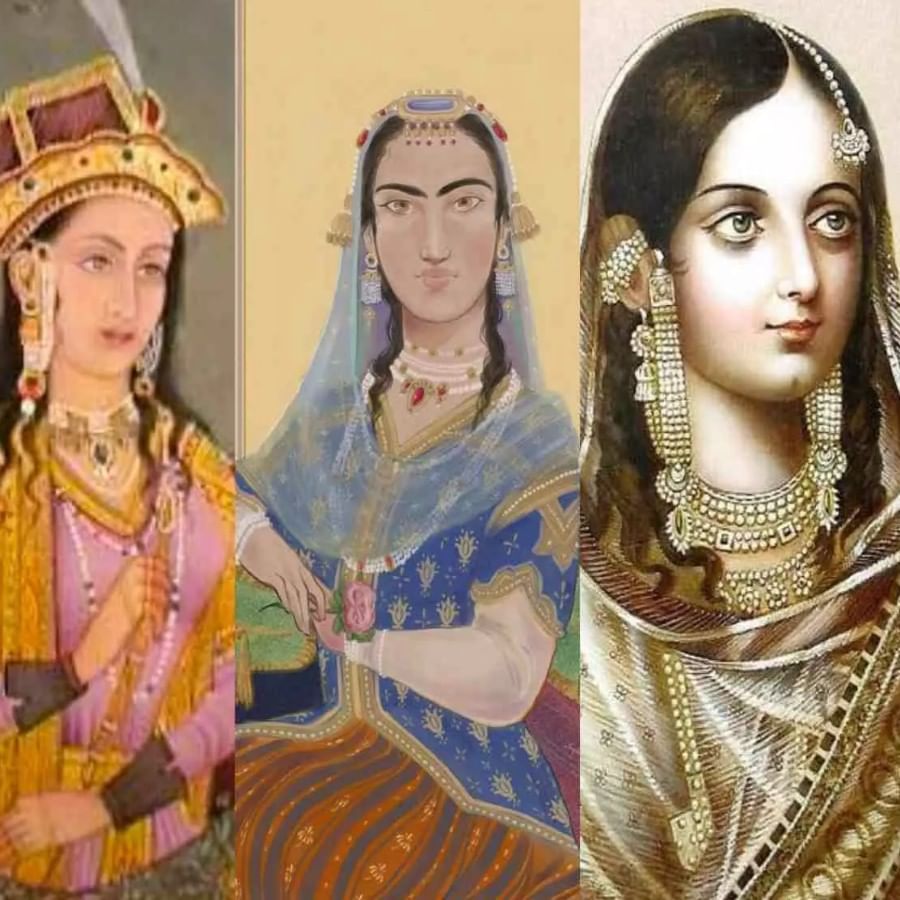 Akbar was considered superior to other Mughal emperors. It is said that Akbar had 300 wives. Not everyone had got royal rights. Of these, only 35 were those who had these rights. The most famous of these went to his wife Jodha Bai, who was the daughter of Raja Bharmal, the Rajput ruler of Ajmer. She is also known as Mariam-uz-Zamani. Jodha Bai, Rukaiya Sultan, Salima Sultan are seen in the picture. Jahangir was the fourth Mughal emperor and one of the most prominent rulers of the empire. Jahangir had a total of 20 wives, the most favorite wife was Nur Jahan. Most of Jahangir’s marriages were for the fulfillment of political and personal purposes. In 1585, when Jahangir was only 16 years old, he was engaged to Manbai, the Rajput princess of Amer. Jahangir changed the name of Manbai to Shah Begum (royal lady). Jahangir married many women soon after his first marriage. Udai Singh’s daughter Jagat Gosain was married to Jahangir on June 26, 1586. Soon after their marriage, Jagat Gosain, who was famous for her beauty, wit, bravery and humour, became Jahangir’s favorite wife. In the picture – Man Bai and Noor Jahan 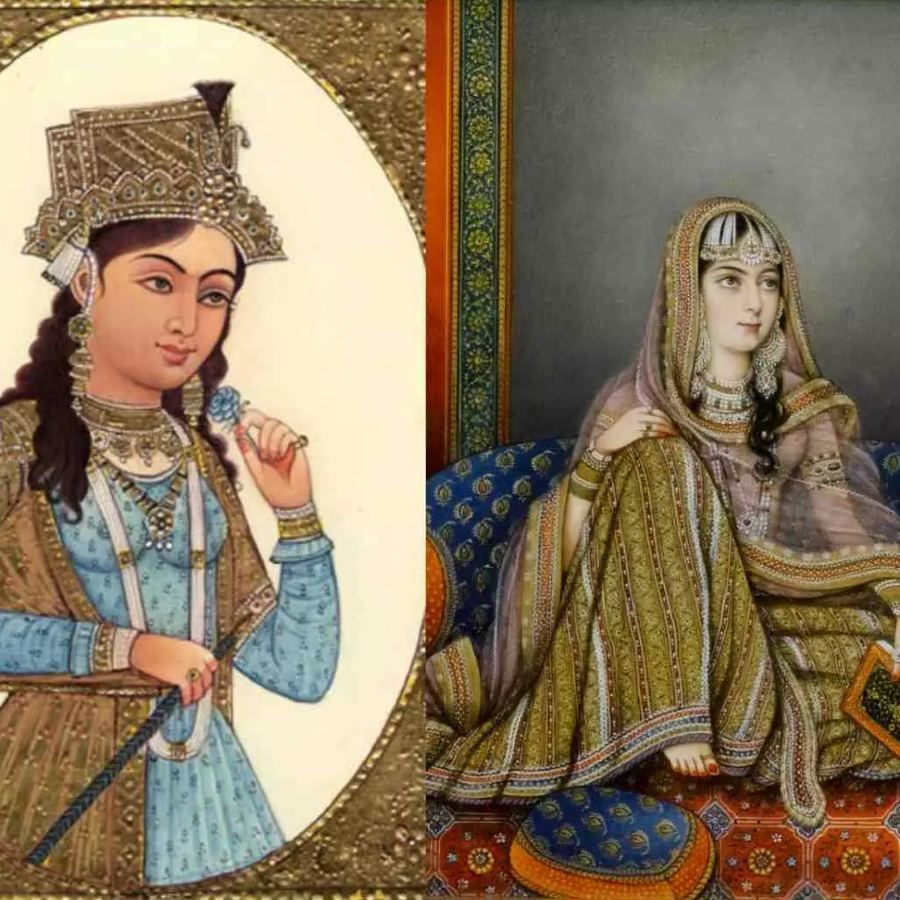 Shah Jahan was one of the most successful emperors of the Mughal Empire. He was the fifth Mughal ruler. Shah Jahan and Arjumand Bano Begum (Mumtaz Mahal) got engaged in 1607. Due to the predictions of astrologers in that period, both had to wait till 1612 to get married. His marriage to Mumtaz was delayed by five years. After being instructed to postpone his marriage to Mumtaz until 1612, he married his first to a Persian princess, Kandhari Begum. Shah Jahan also married two more women, Akbarabadi Mahal (Izz un-Nisa Begum) and Muti Begum, but it is said that this was done for political reasons. In picture- Mumtaz Mahal and Izz Un-Nissa Begum. 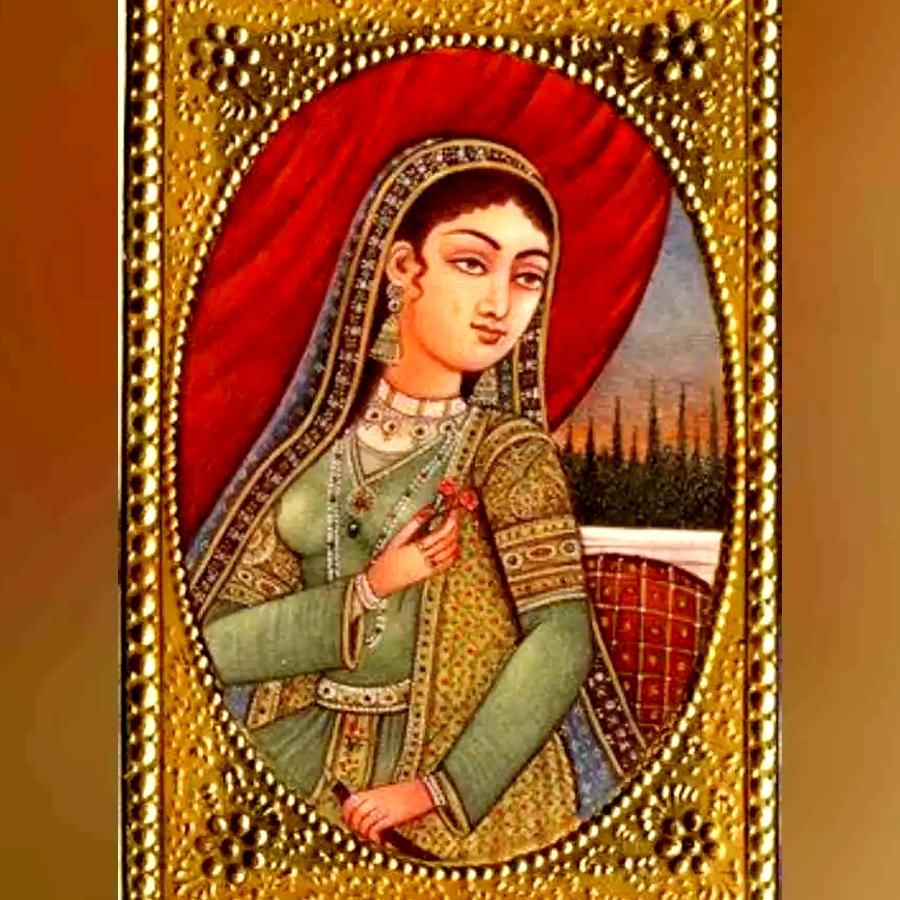 Aurangzeb has been a famous name among the Mughal kings. After defeating the elephant that attacked Aurangzeb, he gained the respect of his family and the Mughal court. In 1637, Aurangzeb married the Safavid princess Dilras Bano, also known as Rabia-ud-Daurani. She was Aurangzeb’s favorite and first wife. There was a time when Aurangzeb had fallen in love with a young maid named Hira Bai, but was saddened by her sudden death. Nawab Bai, known as Rahmat al-Nisa, married Aurangzeb in 1638. It is said that Aurangzeb also married Aurangabadi Mahal. Dilras Bano is seen in the picture. 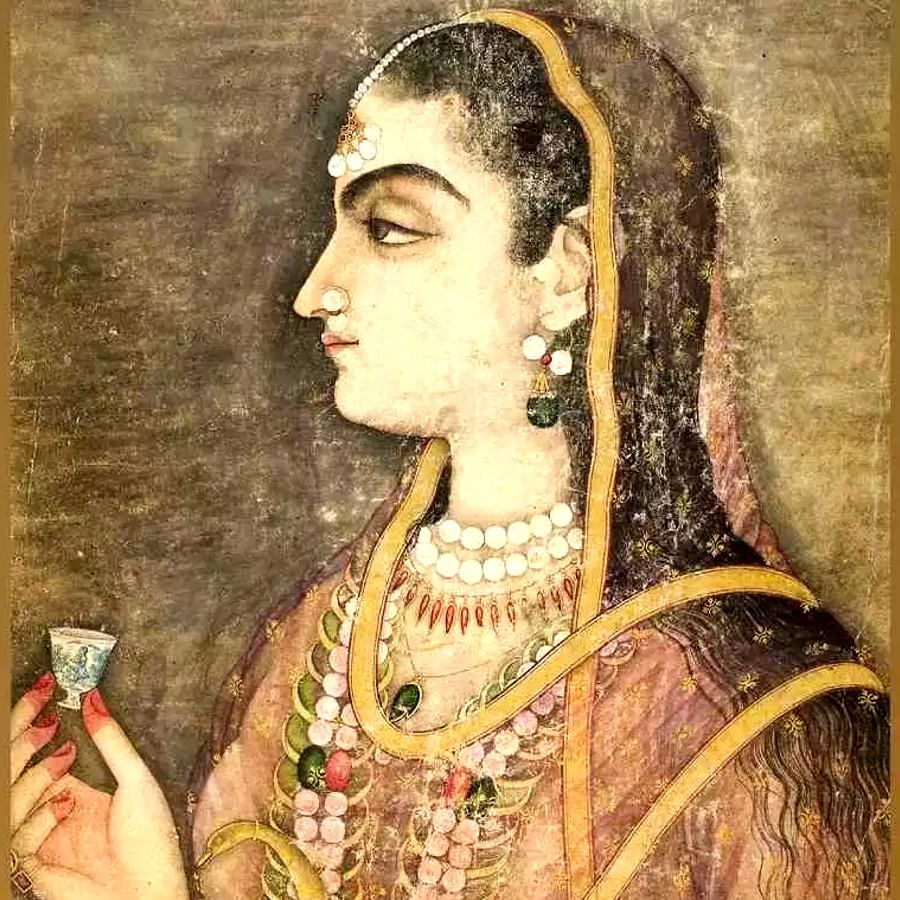 Azam Shah was the eldest son of Aurangzeb. Azam was about to marry a girl from his cousin’s family. His name was Iran Dakht Rahmat Bano. This could not be possible due to his death in Dhaka in 1665. In 1668, Azam married Princess Ramani Gabharu. After marriage, her new name was changed to Rahmat Bano Begum. This marriage took place under a political agreement. After this marriage lasted for a year, in 1669, Azam married his first cousin, Princess Jahanzeb Bano Begum. She was the niece of his eldest uncle Dara Shikoh. Jahanzeb was Azam’s favorite wife. Jahanzeb Bano is seen in the picture. 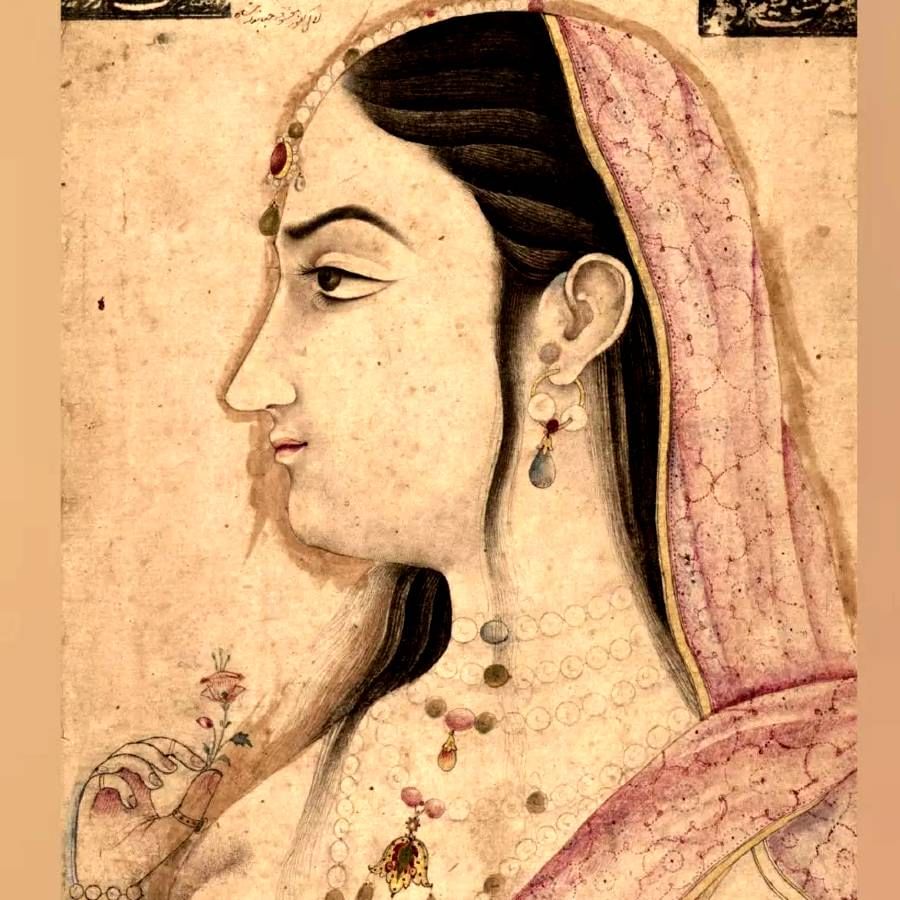 Jahandar Shah was the 9th Mughal emperor, who ruled for only one year between 1712-1713. Jahandar Shah was known as a careless ruler. His court was known for dancing and entertainment. Mirza Mukarram Khan was the first wife of Safavi’s daughter Jahandar Shah. After the death of his first wife, Jahandar married his niece Syed-un-Nissa Begum. Anoop Bai, the princess of Rajputs, was his third wife. He was married for the fourth time to Lal Kunwar, the daughter of Khasusiyat Khan. Jahandar gave Lal Kunwar the title of Imtiaz Mahal. Lal Kunwar is seen in the picture. 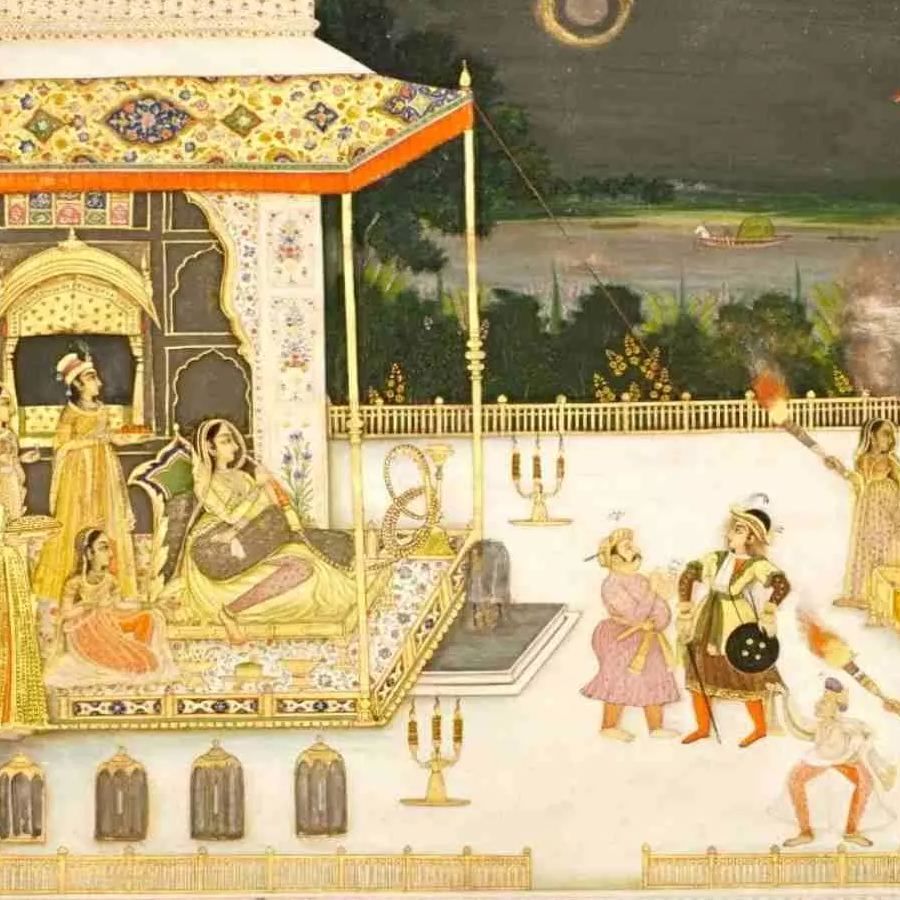 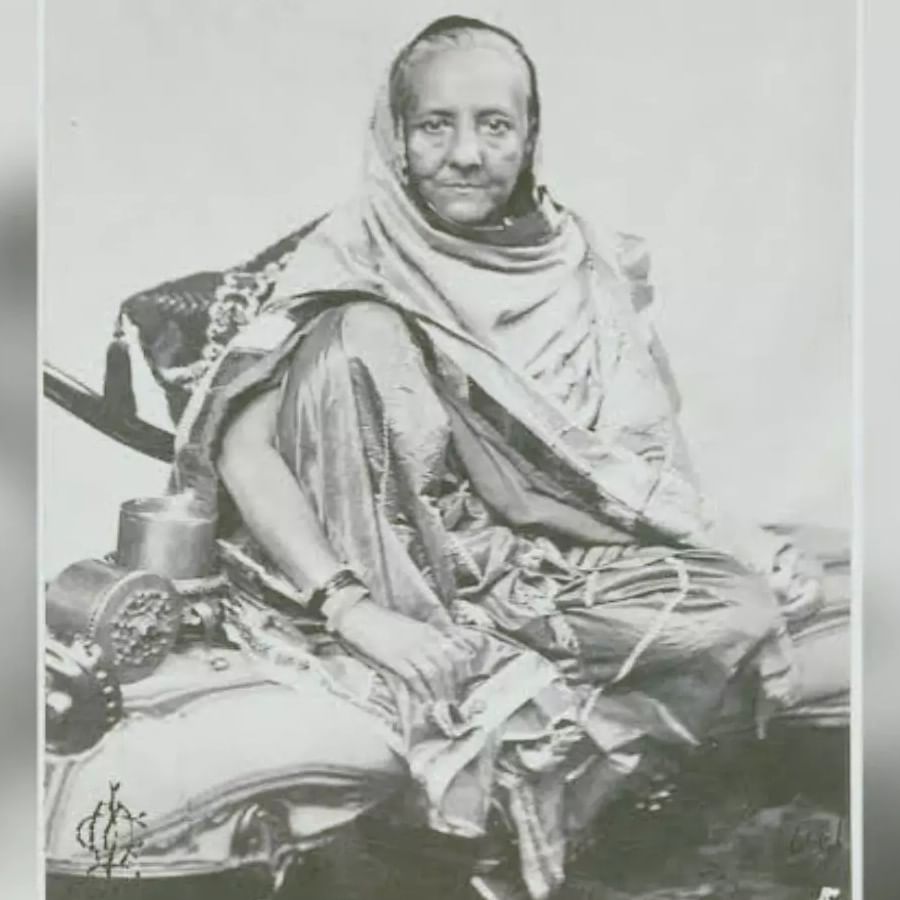 Bahadur Shah II was the last emperor of the Mughal Empire. Which was also known in history as Bahadur Shah Zafar. He ruled from 1837 to 1857. Bahadur Shah Zafar had four wives and several concubines. In 1840, Bahadur Shah Zafar married his first wife, Zeenat Mahal. Zeenat was so dear to Bahadur Shah that he gave complete control of his empire. Zeenat Mahal’s greatest desire was to crown her son as the next emperor of India, but Britain’s law of inheritance came in the way. Even during the freedom struggle, she forbade her son to negotiate with the rebels as she knew that the rebellion would soon be suppressed and she would make her son the ruler. But the British wanted to abolish the monarchy. As a result, he was sent with his son to Rangoon, where he died in 1886. Zeenat Mahal is seen in the picture.