Agnipath Protest: No one could have imagined that this level of destruction would take place in the agitation against the employment policy announced by the Central Government under the Agnipath. Is destruction the solution to the problem ..? Now the country is asking the agitators the same question .. Now the agitators are waging war on whom ..? Does anyone actually consider it a protest to burn our trains ourselves and destroy our property ourselves ..? There are many ways to protest if you do not like the policies brought by the central government. But will the society agree if we set fire to our house in this way and protest in that fire ..? Now at the Secunderabad railway station .. the only thing visible in the events of the last few days in Bihar .. are not protests .. acts of vandalism ..

Is this the conspiracy behind the destruction ..?

Farmers have been protesting for months on the borders of Delhi against the farmer laws brought by the Center in the country. It was also peaceful .. No trains were burned anywhere like this. Eventually the aisle pitched yours tents and worried day and night. As a result, the central government stepped down. The farmer laws were withdrawn. The Telangana movement lasted for years. There is no bloodshed anywhere .. there is no such atrocity. The people of Telangana have fought peacefully and democratically and won. Even Gandhiji of the day did not say anywhere that he would commit genocide unless the struggle against the British was done in various peaceful ways. Hundreds of students at Basra Triple IT have been protesting peacefully at the gate for the past four days. They are holding umbrellas and protesting in Mandutenda for the solution of their problems. Moreover nowhere did Triple IT destroy assets. But no one was happy about the incident at the Secunderabad railway station.

Thousands of travelers across the state today have suffered hell over such devastation. On the Secunderabad railway station platform, protesters arbitrarily vandalized stalls and set fire to trains, leaving some mothers in a state of shock. A mother touches the heart of her child crying in front of the crumbling stall, touching the hearts of the onlookers. This kind of pity and sympathy was not felt among the masses even when they saw the wounded carrying the policemen wounded in the firing of the railway police. Because Democrats do not invite this destruction.

Was it really an accident that actually happened accidentally .. or was there any conspiracy ..? Is there any point in opposing the Agneepath scheme so much? 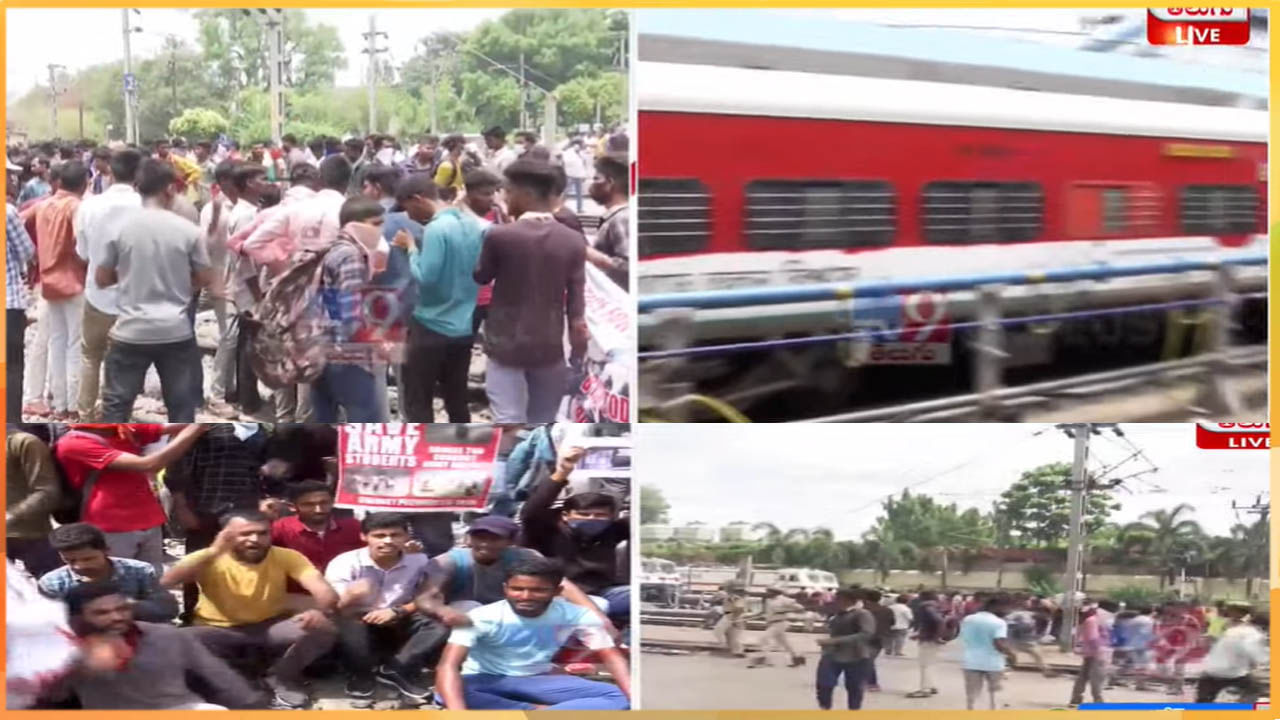 Agneepath is the name of a new scheme brought by the Center to join the Army. It was inaugurated by Union Defense Minister Rajnath Singh. The announcement of millions of jobs was at first largely unintelligible to anyone. In fact, many people are still unaware of this fireplane. But then the same statement caused havoc. It is a scheme brought by the Center to give opportunity to the youth in the Army. Soldiers recruited as part of a firefight are called firefighters. They can serve in the military for up to four years. After that their performance will be reviewed. About 25 percent of all firefighters retire. That means 25 out of every 100 people will be regularized. They can work as non-officers for 15 years. Those who join the army under Agnipath will be given a salary of Rs 30,000 per month for the first year. This includes 21 fingers on the hand. The remaining Rs 9,000 will be deposited in the Agniveer Corpus Fund. For the second year he gets a salary of 33 thousand rupees per month. 30% of which Rs.9900 will be deposited in the Corpus Fund. Out of the 36500 given every month for the third year, 10980 will be deposited in the Corpus Fund. 40 thousand per month for the fourth year. 12000 of which will go to the Corpus Fund. Thus, a total of 5 lakh two thousand rupees will be deposited in the corpus fund in four years. The center will deposit an additional Rs 5 lakh 2 thousand for this. 11.71 thousand after four years including interest on this amount. This amount is income tax deductible. During this four-year period there will be other concessions and facilities as per Army regulations. Those who complete four years of service will have a comprehensive financial package. People between the ages of seventeen and a half and 21 can join the army through the Agnipath‌ scheme. This time the maximum age limit was raised by two years to an additional 23 years. Young men and women in tenth grade or Inter are eligible. However, right now only boys are given the opportunity. Later it is said that the girls will also be given this opportunity. Can work in Army, Air Force, Navy depending on qualifications.

Everything is fine but the real reason for these conflicts is now only four years of job loss. Once upon a time a job in the Army was a way to move forward with patriotism. Most people go to the Army, especially from states like Punjab. They still make up the lion’s share of the army. Initially, they were not interested in holding an army rally. Even their parents were not willing to send their children to join the army. Fifteen years of service in the Army earns respect, a good salary and a pension in the community. That is why the youth are showing great interest towards the Army, Navy and Air Force. In some countries, such as Russia, every citizen is required to serve in the military for at least two years. But we do not have that situation .. Joining the Army is a personal decision ..

Railway laws are more stringent. Destroying railway property would have to revolve around the railway courts for life. If those involved in today’s unrest are no longer likely to be selected for the Army. Criticisms are already circulating on social media about what those who set fire to trains here on such a large scale will do to protect the country at the borders tomorrow. Concerns over the railway tracks during the Telangana movement are still circulating around the railway courts. Those caught up in the cases of the train burning incident in Tuni in Andhra Pradesh are still appearing in court. The state government is likely to take up cases against those involved in various agitations if it so desires. But it is impossible to lift them if they are caught in cases of destruction of central government assets. Section 126 carries a maximum sentence of 12 months ‘imprisonment for pulling a chain on a moving train for no apparent reason. Section 156 carries a maximum sentence of 14 years’ imprisonment for doing something similar. Incidents such as burning of trains and destruction of railway property are punishable by up to sixteen years in prison. The trial in the railway courts is lengthy. There is a stipulation that you must attend court for every trial.

In fact there are no such concerns across the country regarding the Agneepath scheme. Only in Bihar and Telangana have such incidents been reported. It is for this reason that many suspicions have been raised over these incidents. Some suspect it was a mere conspiratorial sabotage. This was not an accidental momentary concern at the time. Entered the railway station with petrol cans as per plan. At the railway station, there was a dearth of stones .. They were blown away .. The trains were attacked with stones at will .. Then the trains were set on fire with petrol cans. The stalls on the railway station platform were demolished. Passengers unaware of this concern were shaken to understand what was going on. As a result, the railway department has suspended several trains. All MMTS trains in Hyderabad have been canceled. Elsewhere, passengers were stranded on trains. Understood what to do, the trains disembarked and left on the road. Eventually the railway police opened fire to control the protesters. A young man was killed in the firing. Others are being treated in hospital with bullet wounds. In fact, some came to raise concerns against the fire, while others planned to wreak havoc. As a result, large scale destruction has taken place now .. Now the perpetrators of the riots at the railway station should ask themselves one question .. Now on whom are we all waging war ..? Whose assets did we burn? Who dominated ..? That should be questioned again and again. If it happens on both sides it is a war .. If it happens between two kingdoms it is a war .. If it happens between two communities it is a war .. But it is not a war .. Secunderabad railway station is not just a battlefield .. It is just destruction .. That’s all