Redmi Note 9 Pro has knocked in India and its starting price is Rs. 12,999, which has many latest and interesting features. While other phones with multiple latest features are also present in the mid-range at the moment, including names like Realme 6 and Samsung Galaxy M30S, how are they known to be different and impressive from them.

Design of redmi note 9
Talking about the design of Redmi Note, the thickness of this phone is 8.8 millimeters and 209 grams weight. In such a situation, many users may find this phone heavy. Xiaomi has come up with a new camera bump design, which adds to its charm. This phone of Redmi uses Gorilla Glass 5 on the front and back panel. Let’s say that its frame is made of polycarbonate. The punch hole camera is provided on the front side. This phone has a fingerprint sensor on the power button, which helps unlock the phone. However, this is not the first phone to offer a fingerprint sensor on the power button. Overall, it is good in terms of design, but the placement of the buttons may bother you a bit.

Specification of redmi note 9
In this Redmi phone, you get a 6.67-inch full-HD + display, which has a large hole-punch for the front camera and the resolution of the display is 1080×2400 pixels. This phone has a display of 60 Hz refresh rate, which may disappoint some. Actually, now some companies are offering 90 Hz refresh rate display at this price, then it will take 60 Hz refresh rate less. This phone has a 5020 mAh battery, which gives good battery backup and runs great on gaming. The company has given a charge of 18 watts in it, which makes charging the battery quick. Its display is bright and sharp. The colors look good and if you want to change the color settings according to you, there are some presets available in the Settings app. We found the camera cutout a bit distracting when viewing the video-screen. Some apps are designed to hide the cutout at the top of the screen with a black band. However the speaker quality may disappoint you a bit.

Redmi Note 9 Pro Processor
This phone has an advance chipset coming with Snapdragon 720G two high-performance 2.3 GHz cores and six energy-efficient 1.8 GHz cores, built on 8nm process. This phone supports the game well and also gives better performance. There are many high graphics games ranging from PUBG to
Can be played easily. 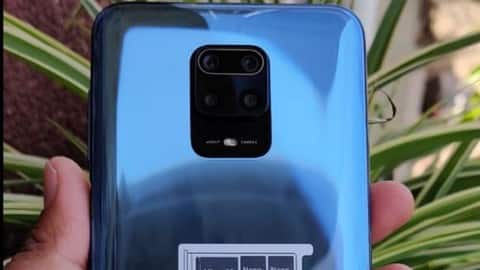 Redmi Note 9 Pro Camera Setup
Four cameras have been setup on the back panel of this smartphone, of which the primary camera is 48 megapixels, which has an aperture F / 1.79 and it comes with Samsung Isosel GM2 sensor. At the same time, other cameras have been given 8 megapixel wide angle, 2 megapixel depth sensor and 5 megapixel macro lens. The camera of this phone is good. Clicks a good photo in daylight. Photos have better details, which can give you lots of likes on social media. Its wide angle also works well and macro camera is also good. Overall, looking at its photography, this phone is good. Whereas the front camera clicks good photos in both day or night. However, its beautification mode makes it much more artificial, whose natural colors change and your selfie may be spoiled.

Buy or not
Considering the price, its base variant is a good choice, as its specifications and performance are quite impressive. We used this phone for 10 days and we found that it works better in entertainment, photo graphy and entertainment. Although there were problems in using the phone with one hand at times, but this big screen was found useful when watching the film.

Vivo X50 series will open curtain in India from July 16, know what will be special