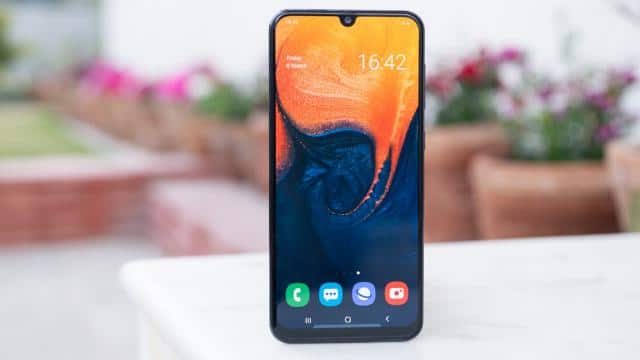 Samsung has launched a 6.4-inch display on the Galaxy A30 launched in the budget segment, which comes with a thin border. Text and images look very clear. Although the company did not mention Gorilla Glass or any other glass protection, there were no scratches or marks on the screen during the review. Glossy side and back panels look good and fingerprints fall easily on them. There is a fingerprint sensor on the back panel of the phone and this sensor does its work fast. This phone also has FaceAnalock, which has an average performance. Overall, the Samsung Galaxy A30 is a good phone that looks good despite being made of plastic. It will be available in multiple colors but we have a black version available.

This phone comes with the Octa-core Exynos 7904 processor and has only one variant in the market which will get 4 GB RAM and 64 GB internal memory. The Galaxy A30 comes with Samsung’s new One UI based on Android 9 Pie. In terms of general chat and productivity app, the Galaxy A30 is a good phone. This phone did not heat up during the review.

The Galaxy A30 has a 16-megapixel primary camera with an F / 1.7 aperture and a 5-megapixel wide-angle camera. There is a scene optimizer in the camera app which automatically identifies the object and sets the exposure, which is a good feature and also helps in clicking good photos. The cameras of this phone do their job well and take very clear photos which a common user will like. Let’s say that the camera app has Panaroma, Pro and Live Focus modes. With the help of Live Focus mode, you can also reduce or decrease the background blur level before and after clicking the picture. At the same time, a 16-megapixel front camera has been given for the selfie, which has an aperture F / 2.0. It works correctly in daylight. Colors are good and HDR also works well when shooting against light. The company has given a 4,000 mAh battery in it. The fast charger that comes with the phone charges up to 70 percent of the phone’s battery in an hour. Overall, it is a good phone.

Powerful camera in Vivo V17, but what is phone worth?

OnePlus 7 Pro is made up of many great features.