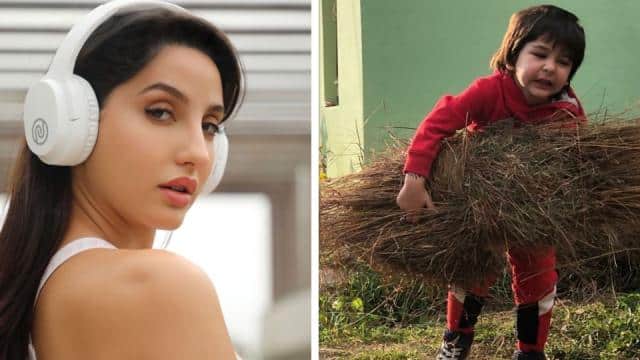 Saif Ali Khan and Kareena Kapoor’s star kid Taimur Ali Khan has been the choice of photographers since birth. Wherever he goes, Paparaji is seen clicking his photos. Not only this, he has also started reacting to the photographers. Recently, he had asked photographers several times not to take photographs. Timur, who was with his mother, said that no photos, no photos. On the occasion of Christmas, he was seen removing masks to get the picture clicked and photographed happily. Pictures of Taimur Ali Khan have also become quite viral on social media. Kareena Kapoor often shares her handsome son’s pictures on social media.

Currently, Kareena Kapoor is going to give birth to another child. She often shares photos with Baby Bump. Not only this, Kareena Kapoor has also decided to write a book on her pregnancy experience. Recently, he released the cover page of the book on Instagram. Kareena Kapoor has been working for several months of pregnancy. Apart from this, she has been doing everything from advertising to radio shows. Talking about Nora Fatehi, she was last seen in Remo D’Souza’s Dancer 3D. She was also recently seen in Guru Randhawa’s music video single.

Nora Fatehi is currently preparing for the release of Abhishek Dudhaiya’s movie Bhuj: The Pride of India. The film is based on the 1971 Indo-Pak war. In this film, he has got an opportunity to work with stars like Ajay Devgan, Sanjay Dutt, Sonakshi Sinha, Sharad Kelkar and Amy Virk. The film is to be released on Disney Hotstar.

Devoleena Bhattacharjee trolled for not speaking about Divya Bhatnagar’s husband before, actress gives a befitting reply

Taimur folds his hands in front of the cow, sings to the tune of bean and plays, watch full video