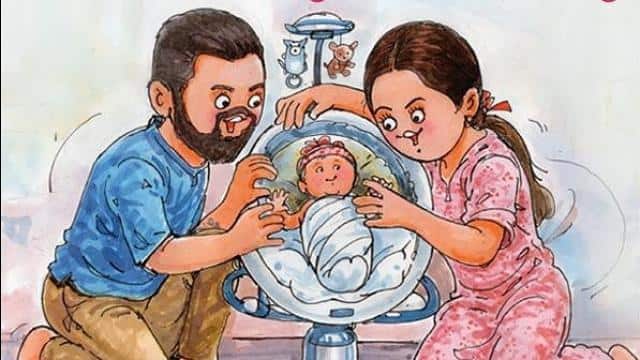 Dairy products company Amul has congratulated Anushka Sharma and Virat Kohli on their birth in their own style. Amul, who has often drawn a graphic on any event or news differently, has congratulated Virushka in a unique way this time. An animated graphic has been shared on the Instagram account of Amul India, in which Virat Kohli and Anushka Sharma are seen taking care of the baby girl. The girl is shown in a trophy. Not only this, along with this graphic, the message reads, ‘Bold on this delivery.’ With this, the caption of this graphic from Amul reads, ‘Birth of daughter to Anushka and Virat’s house.’ This post by Amul India has been well liked by the people.

Some users, while enjoying the animation of Amul India, have said that Virat Kohli’s animation is not good and that he looks more like Virat rather than Virat. Please tell that actress Anushka Sharma gave birth to the daughter on Monday in the afternoon. Virat Kohli gave this information to his fans through social media.

Virat Kohli wrote, ‘We have a daughter born here this afternoon. Both Anushka and daughter are perfectly healthy. We are very happy to have the chance to experience this new chapter of life. Hopefully on this occasion you will respect the privacy required by us. Apart from this, a gift hamper has been sent to the photographers on Wednesday from Virat and Anushka, including a letter urging them not to take pictures of the baby girl.

Fan said to Shahnaz Gill, you have wrinkles on your face, know what the actress replied

Flashback: Dilip Kumar’s father used to call actors ‘Kanjar da Putr’, know what he said when his son comes to the cinema