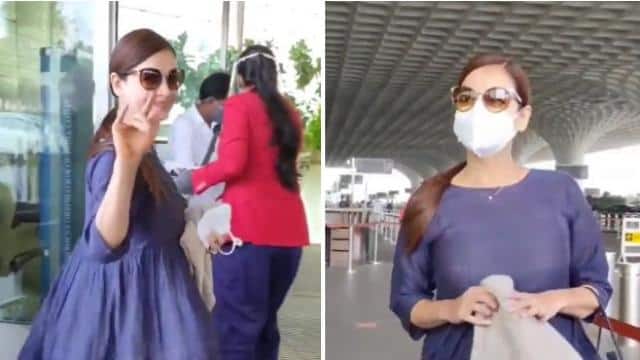 Bollywood actress Dia Mirza recently got married with boyfriend Vaibhav Rekhi. The two had been dating each other for a long time. Rather, reports were also coming that Dia Mirza has spent the entire lockdown with Vaibhav at his house. Both made seven rounds in the presence of a female pundit on 15 February. Now after marriage, Dia Mirza was first spotted in Mumbai.

Dia Mirza was spotted at the airport. This was his first public appearance. A video of Dia Mirza is going viral on social media. Fans are promoting the news of her pregnancy by making fun of Dia Mirza. Dia Mirza was wearing a blue colored cotton gown, which was waving a lot due to the wind. Seeing this, some people felt that Diya Mirza was pregnant. However, there has been no reaction from Dia Mirza.

When Taimur gave good news to Kareena Kapoor and Saif Ali Khan, he got this reaction from his son

It is known that Dia Mirza had at the very end confessed to the relationship with Vaibhav Rekhi and told about marriage. Fans are also speculating about Dia Mirza’s pregnancy. The manner in which Diya and Vaibhav got married was simple, the rituals associated with it were equally special. Diya had shared a post that she was married by a woman Pandit. Diya also told that the rituals of Kanyadaan and Bidai were not performed at her wedding. Eco-friendly items were also used for decoration at their wedding.

Bollywood round up: read, today’s 10 big news of entertainment and gossip

Taimur folds his hands in front of the cow, sings to the tune of bean and plays, watch full video