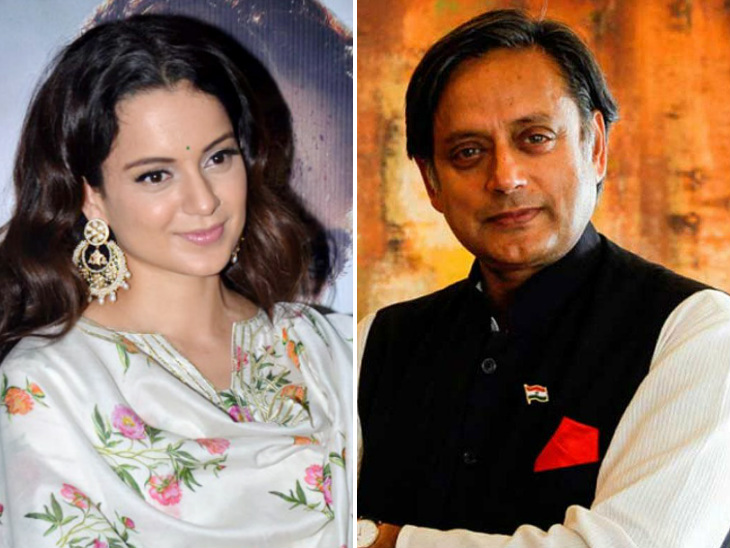 Kangana Ranot on Tuesday expressed displeasure over a statement by Congress leader Shashi Tharoor. In which he gave the idea of ​​giving monthly allowance to domestic women. Kangana was taunting Shashi Tharoor and said to stop seeing business in everything. Now, Shashi Tharoor responded to this stance of Kangana Ranot and said that I want every Indian woman to be empowered like you.

I agree w / @KanganaTeam that there are so many things in a homemaker’s life that are beyond price. But this is not about those things: it’s about recognizing the value of unpaid work & also ensuring a basic income to every woman. I’d like all Indian women to be as empowered as you! https://t.co/A4LJvInR4y

Shashi Tharoor replied to Kangana in a social media post, writing, I agree with you that there are many things in the lives of domestic women, which cannot be valued. But this issue is not about those things. Every woman is about getting some salary and recognition of their work. I want every Indian woman to be empowered like you.

Kangana was angry at Tharoor
Earlier, Kangana wrote in a social media post flaming Shashi Tharoor, “Don’t price our sexuality. Don’t give us money to take care of your loved ones. We don’t need salary to be our own little world, our home’s mallika Stop seeing business in everything. Dedicate yourself to your woman, because she needs you. You don’t love / respect / pay. “

Don’t put a price tag on sex we have with our love, don’t pay us for mothering our own, we don’t need salary for being the Queens of our own little kingdom our home, stop seeing everything as business. Surrender to your woman she needs all of you not just your love / respect / salary. https://t.co/57PE8UBALM

Kangana was angry at this post by Shashi Tharoor
Shashi Tharoor wrote in his post, “I support the idea of ​​Kamal Haasan in which he advocated making housework a salaried profession. Monthly allowance should be given to domestic women by the state government. Working women will get respect and monetize their services. This will increase their power and autonomy and bring them closer to Universal Basic Income. “

Making mistress an employee worse: Kangana
Kangana, in her next post, also responded to a social media user, writing, “It would be worse to make a housekeeper an employee, to cost mothers their sacrifices and unbreakable commitments for a lifetime. It seems that you are the creator of God. Paying for it. Because suddenly you felt pity for their efforts. It’s a somewhat painful and somewhat funny idea. “

It will be worse to reduce a home owner to home employment, to give price tag to mothers sacrifices and life long unwavering commitment, it’s like you want to pay God for this creation, cause you suddenly pity him for his efforts. It’s partially painful and partially funny thought.

In fact, a social media user named Arjitha Singh wrote while raising the question, “Don’t you think the time has come to give respect to the home makers (domestic women) for their work, which has been outstanding for a long time “Our society has never given home makers as much respect as they should have. Working men are given more importance. Household women have to financially depend on their husbands.”

Haasan gave a statement during the election campaign
Makkal Needhi Mayem (MNM) president and actor Kamal Haasan on Monday targeted other political parties AIADMK and DMK during his campaign. He said that the love he and his party are receiving is proof that people now want change. Kamal Haasan had questioned the safety of women in Tamil Nadu and talked about making the work of domestic women a salaried profession. Assembly elections are due in Tamil Nadu in April-May.

Chitra did not come out to bathe, dead body found on opening door, fiance told police

Bigg Boss 14: Rakhi Sawant told when will open her husband’s identity, Bolin – I am not doing publicity

The entire starcast of the franchise will be seen in ‘Housefull 5’? Preparation to make a film on a big level