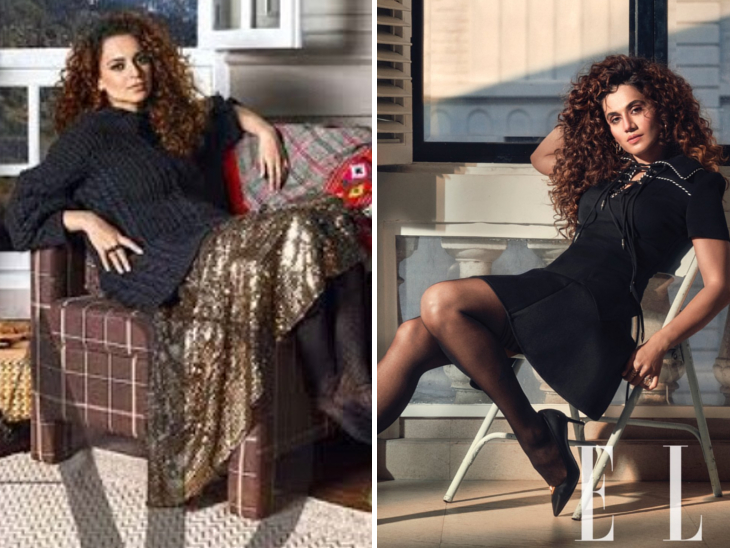 Kangana Ranot has taunted him by calling Taapsee Pannu’s latest photoshoot a copy of one of his photoshoots. Not only this, Kangana has compared herself to the great Amitabh Bachchan. In fact, a fan of Kangana shared the latest photoshoot of Taapsee on social media and wrote, “And she copied Kangana for the 100th time.” Fan has shared a collage of photos of Kangana and Taapsee, in which both actresses are posing in the same style and both are wearing black dresses.

Ha ha ha I am flattered, she is a true fan, dedicated her whole existence to study and impersonate me to the point of dessolution it is rather impressive, also no other female superstar has taken over pop culture the way I have I am the most mimicked superstar after Mr Bachchan.

He exists to copy me: Kangana

Kangana commented on Fan’s post, writing, “Hahaha … I am very happy. Her whole existence is in studying and copying me. It is very impressive. Also a female superstar pop culture has to I have not been carried forward. After Mr. Bachchan I am the most mimicked (copied) superstar. “

When Kangana Ranot raised the issue of nepotism after the death of Sushant Singh Rajput, she called Taapsee Pannu a B-grade actress. He said in a statement, “I am at a loss to stay here (in Bollywood). Because he (the movie mafia) will get 20 more needy outsiders like Taapsee Pannu and Swara Bhaskar tomorrow, who will say only Kangana has a problem with nepotism.” . But we love Karan Johar. If you love Karan Johar then why are you both a B-grade actress? You look better than Alia Bhatt and Ananya Pandey. Both are very good actresses. Why don’t you work? Meet? Your entire presence is evidence of nepotism. “

Taapsee Pannu reacted strongly to Kangana Ranot’s statement, saying in an interview that Kangana and her sister Rangoli did not give credit to their hard work and her name was nothing short of haresment. During this time, Taapsee had also said that she does not take advantage of someone’s death (Sushant Singh Rajput) for personal revenge.

Shadow ‘Khiladi’ in Forbes list: Only Akshay Kumar from Bollywood among the 100 highest-grossing celebs in the world, earned 356 crores in a year.

When the heart of actresses came on business tycoons: Divya Khosla married Bhushan Kumar at the age of 18, Tina left Bollywood after marrying Anil Ambani