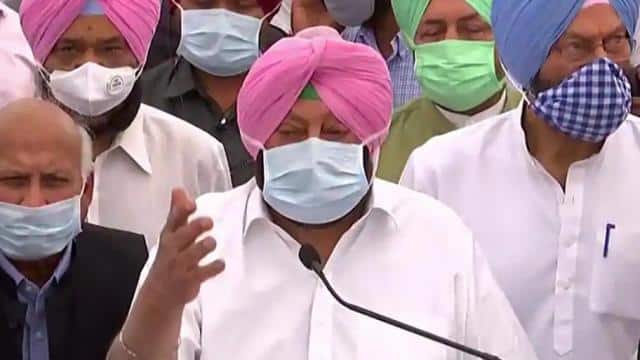 Punjab Chief Minister Amarinder Singh on Thursday announced several welfare schemes including providing free sanitary pads for girls studying in the state’s high schools and colleges. According to a statement, the Chief Minister dedicated the month of January to the girls and paved the way for distribution of 2,500 sports kits among the youth. He also started a program to give property rights to slum dwellers and launched a smart metering project worth over Rs 75 crore in addition to an e-filing portal for consumer complaints.

The Chief Minister inaugurated the “Dhiyan Di Lohri Yojana” along with her mothers, provided five girls with omen of Rs 5,100 and a baby kit for each. The statement said that congratulatory letters written and signed by the Chief Minister would be handed over to the parents of more than 1.5 lakh girls celebrating their first Lohri this year. The Chief Minister announced to provide free sanitary pads to all girl students of high school and colleges, except those living in slums in rural areas, especially across the state.

In the first phase of commencement of the program, 2,816 residents will get ownership in 10 slums of Patiala, Bathinda, Fazilka and Moga districts. The Chief Minister asked the local government department to ensure basic civic amenities including drinking water, street lights and roads in the slums. Inaugurating the Rs 75.64 crore smart metering project, the Chief Minister said that the scheme would help in reducing human error in manual reading through automatic uploading of data. He said that 96,000 meters would be installed across the state under the project from January 2021 to December 2021, which would help in concealing readings / preventing power theft and improving quality.

MLSU Convocation 2020: The syllabus of technology subjects should be prepared not only in English but also in Hindi- Governor

UP: 82% of council teachers are not getting new pension cuts